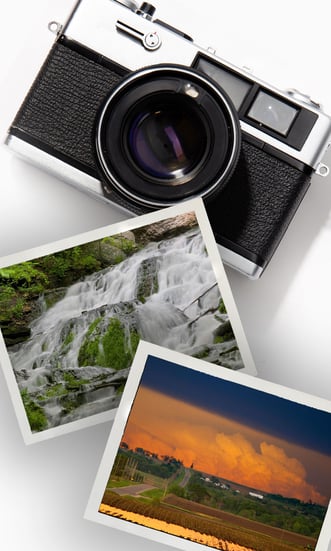 Give us your best shot!

Eastern Iowa is an incredible place to call home! Join ImOn in celebrating the beauty of Eastern Iowa with our annual ImOn photo contest and calendar. Help fill the pages of our upcoming 2022 ImOn customer calendar with photos showcasing the beautiful places we serve. We are looking for photos that capture our breathtaking landscapes, area events, holiday fun, and vibrant culture. Cash prizes will be awarded to the entrants of the photographs selected to be in the 2022 ImOn Customer Calendar.

The photo contest is open to current ImOn customers and employees, who are over 18 years of age prior to, or on, the last day a photo can be submitted, July 30, 2021.

Between April 5, 2021, and July 30, 2021, entrants can submit a photograph by completing the contact information in the form below and uploading a photo file in the form.  All submissions must include the name, address, phone number, date of birth, and email address of the individual entering the photo in the contest, along with the location of where the photo was taken. Entrants may submit more than one photo, but each photo must be submitted individually with a separate entry submission. Photo entries that are incomplete, altered, reproduced, forged, counterfeited, or irregular in any way, are automatically void.


Release and Limitations of Liability: By participating in the Contest, entrants agree to release and hold the Contest Entities and their respective related companies, parents, subsidiaries, affiliates, and their respective agents and agencies, promotional partners, and their respective officers, directors, employees and agents (collectively, the “Released Parties”) from and against any liability, claims, judgements, demands, controversies, agreements, damages, actions, or cause of actions arising out of participation in the Contest or use of the prize, including, but not limited to: (a) unauthorized human intervention in the Contest; (b) technical errors related to computers, servers, providers, or telephone or network lines; (c) printing errors; (d) errors in the administration of the Contest; (e) late, lost, stolen, illegible, inaccurate, delayed, misdirected or undeliverable, posts, email, mail; or (f) injury or damage to persons or property which may be caused, directly or indirectly, in whole or in part, from entrant’s participation in the Contest.  Entrants further agree that in any cause of action, the Released Parties’ liability will be limited to the cost of entering and participating in the Contest and in no event shall the Released Parties be liable for attorney’s fees.  Entrants waive the right to claim any damages whatsoever, including, but not limited to, punitive, consequential, direct, or indirect damages.

Prizes will be awarded to the entrants of the photographs selected by the contest judges. Each winner will receive a $50 gift card, 2 copies of the 2022 ImOn Customer Calendar, a framed copy of their photo hung in the ImOn Office, and exposures through several digital and print channels. Up to 14 photos may be selected.  Winner will be notified after August 16, 2021, by phone and email at the contact information submitted below.

To enter, fill out the form below and attach your photo file. Up to 14 winning photos will be selected.